Lately motor fusion is becoming more of a given rather than a struggle. Because of the last two surgeries, almost five years ago, both converging as well as diverging my eyes had become a problem. This made for zero comfort zone. Now after more than two years of conscious effort, with some bumbs along the road, I have recovered some control. Vision therapy, a stoic attitude towards other peoples incomprehension and most recently Syntonics have gotten me this far already.

Even though my involuntary double vision because of lack of ocular control before, I am still to some extent suppressing crucial information needed for solid stereo vision. I certainly do receive information from both eyes but poor visual processing is still very much an issue. Aside from maintaining my level of motor fusion, I am focusing on sensory fusion. Increasing anti-suppression and proper visual processing is the last step towards my goal of fully integrated and efficient stereo vision enabling one to live a better life.

What does that mean in practical terms? Anyone knowing anything about vision therapy is very familiar with the red green anaglyph glasses used for anti suppressant therapy. There are endless ways of using them, even games. They are a simple and low tech tool to stimulate your brain towards better binocular integration. 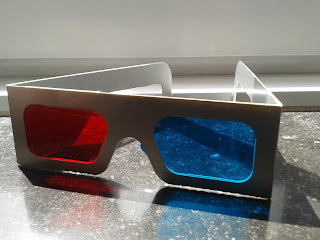 I used them before in therapy but they were rather frustrating because I could not even point my eyes sufficiently. So back then, even though I could do an extra anti-suppressant effort, this just resulted in a more confusing form of double vision. Now things are different. I can make sure my eyes are both pointing at the point intended and put more emphasis on retrieving the input of both to see a coherent whole.

Regardless of the great strides forward taken on the motor fusion front, I'm still taking baby steps as far as sensory fusion is concerned. If you are doing it right you should, instead of some green and red spaces, even see a mix of both colours named 'luster'. It's supposed to be something like orange or gold. So in short, the next step in the process is my brain manufacturing a 'whole new colour' by correctly blending the inputs from both eyes. That's a pretty mind blowing idea... Then again, one should consider that everything we perceive is just virtual reality manufactured by your brain.

As I'm not one to take half measures anymore I gathered as much advise and information as possible on the subject. Such as there are "It's not necessarily logical, you have to allow yourself to see it" and "At this point you just have to keep stimulating your vision and it will come to you." As vague as that may sound, it makes sense to me from a neuroplastic point of view. It's more a courting exercise than a clear cut race towards an obvious finish line. And if pursuing stereo vision really was a courting exercise, she is definitely the mistress of 'hard to get'. I'll have to keep making sure the circumstances are right and trick my brain into making the right connections, as it was tricked into learning plenty of things. However frustrating obtaining basic abilities at a later age may be, unexpected things have happened before so I will make sure they keep happening.
Posted by Michael Lievens at 7:04 AM