Vision Therapy and tDCS (2): How and what?

First of all I want to thank my buddy Andrew for blazing this trail. I knew about TMS and tDCS but I was not planning on trying it myself anytime soon. That was until he figured out what supplies were needed and had successfully tried it on himself with promising results. I'd like to refer to some of his blog entries to get you more acquinted with his DIY vision therapy tDCS adventures.

He even made a video tutorial breaking down what's involved in setting up tDCS.

So I bought a Chattanooga Ionto Dual Channel Drug Delivery Phoresor Device, four 2 by 2 inch Mettler sponge electrodes, a couple of stereo wires and two hair bands. There are cheaper devices but I like to put current through my brain in a reliable manner. It took a while for all that stuff to get here, but finally it did. I bought the stereo wires in a local electronics store and some hair bands in a shop called Claire's. Turns out one never knows when he is going to need French women's accessoires. 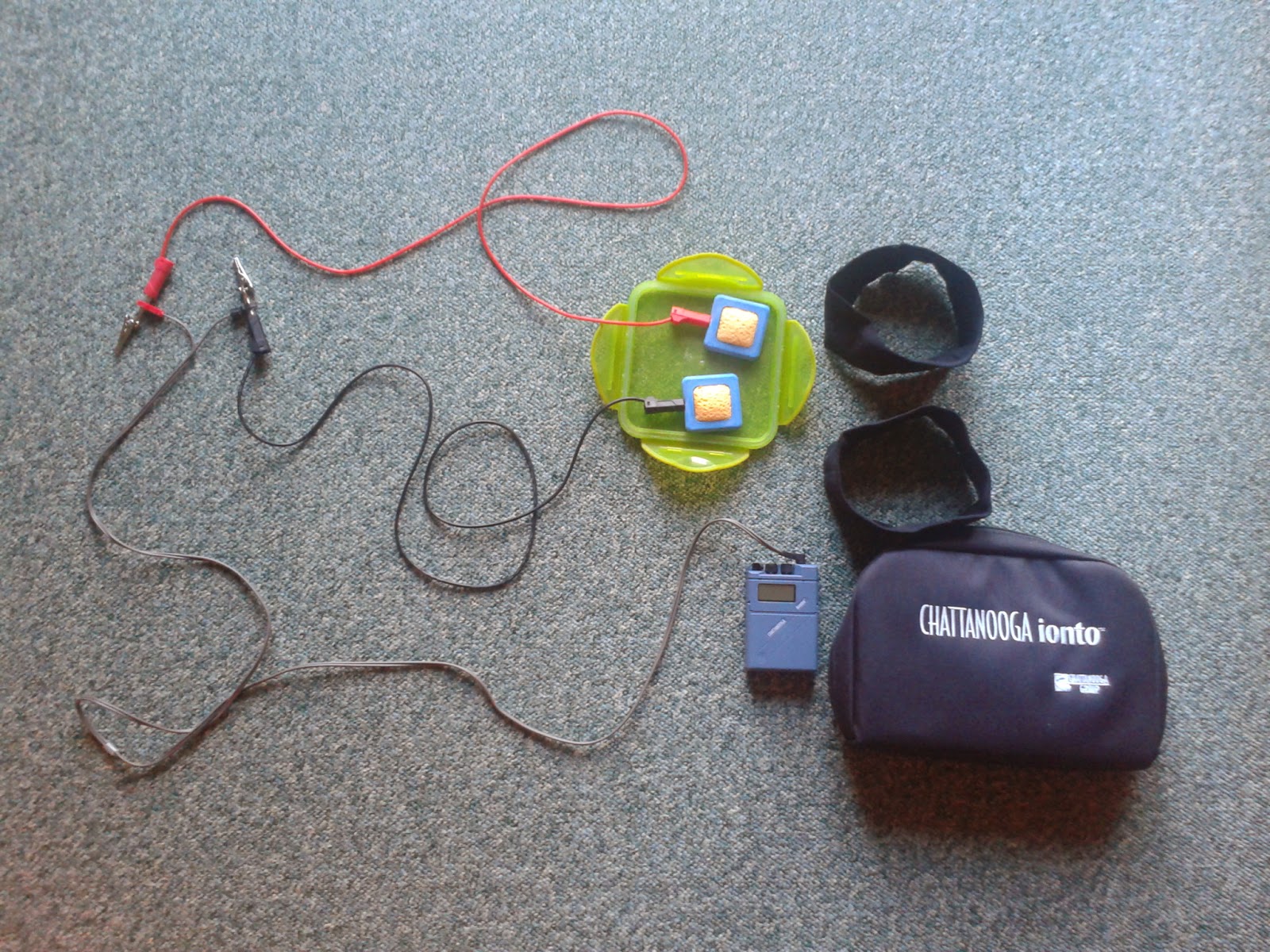 Some more interesting resources and tutorials in addition to the research papers I mentioned in the previous entry:
- http://www.jove.com/video/2744/electrode-positioning-montage-transcranial-direct-current
- There's a pretty numerous tDCS community on reddit
http://www.reddit.com/r/tDCS/comments/1apltw/tdcs_setup/
http://www.reddit.com/r/tDCS/comments/1procy/chattanooga_ionto_how_do_i_start_using_it/
- Video on the physiological effects of tDCS


- Video on clinical applications of tDCS

Really cool video, check it out.  tDCS approaches to paresis, motor learning, reading, aphasia, visio-spacial neglect, pain, depression, ... Some pretty awesome information in there. On YouTube you can find related videos from that same conference.


What can I say about tDCS after using it for one week?
Because the device has two outlets you can use four electrodes, that is 2 anodes and 2 cathodes, at once. However I thought I'd start slowly and only used 1 anode and 1 cathode this week. The amount of current I applied was 2 mA for 20 minutes twice a day. The 'conventional' idea is that the anode excites the brain region it is placed on and the cathode inhibits the brain region it is placed on. If you wet the electrodes appropriately tDCS does not really hurt. Just some minor irritation on the skin in the beginning of the session and then it fades away.

I tried two kinds of electrode placements this week.
- The anode on the right side of the occipital lobe, that is the right hand side of the visual cortex.
The cathode was placed more or less 8 cm lower almost on the left neck/shoulder. This way I get to excite the visual cortex, hit some of the cerebellum and then the current exits below.
- The anode placed on the right or middle of the occipital lobe as before. Instead of placing the cathode 8 cm down, this time I placed it 8 cm upwards over the top of the head also on the right hand side.

In both cases there is a subtle but noticeable difference. Subjectively the second placement felt a little more intense. It's not a dramatic effect but I feel like tDCS does intensify perception during the session and for a time after the session has ended. At the same time it feels stimulating and relaxing. I had read test subjects sometimes experience an altered sense of time perception. I did in fact feel like I lost track of time and was more focused on what I was doing.  As if I was more 'in the zone' and less distracted. Although I did  not experience things spontaneously getting bigger as Andrew described. I think that because all brains are different, also the strabismic ones, every tDCS experience will inevitably vary. Nonetheless I definitely think it's helpful tool for enhancing behavioral therapies. While stimulating I did a number of VT procedures like the brock string, bar reading, eccentric circles, saccades, tracking, balance boarding or just freely playing with my vision. I don't know whether it has to do with tDCS but this week I made the 'ten pages a day' mark with regards to bar reading. I couldn't do ANY bar reading prior January 2014 so that's nice!

The most salient effect for me was being more relaxed and having more energy this week. I was able to be more productive. I've been able to rise a little earlier without loss of functional vision (as would usually be the case). Those must be the 'connectivity driven remote effects'. You are not just stimulating the areas beneath the pads but entire neural networks.

I'm also going to revisit some of the papers I read because I remember other placements being used to enhance attention and perception. I think it might be useful to stimulate motor areas too, aside from solely focusing on the visual cortex. For instance, placing the anode on the motor cortex and the cathode on the frontal cortex as shown in the Jove video. After all, vision is just as much about motor learning as it is about sensory learning.

It might be placebo or it might be the arrival of spring, but I don't think so. Next week I will start using both outlets and all four of the sponge electrodes. I'm curious to learn what the effects of tDCS will be over a longer period of time.
Posted by Michael Lievens at 9:19 AM